Implementing the AfCFTA: When and How?

Importers, exporters, investors and service providers must be able to trade under improved conditions and better rules so that consumes will benefit. Without the prospect of real benefits, they will not invest in new cross-border commercial ventures.

Tariffs should be reduced and procedures at intra-African borders must become easier and more transparent. Domestic arrangements such as national tariff books and certification procedures must be in line with the new inter-state undertakings.

How and when will this happen under the AfCFTA?

The AfCFTA Agreement and the Protocols on trade in goods and services as well as dispute settlement have been signed at the Extraordinary AU Summit in Kigali on 21 March 2018. This was a widely reported diplomatic event. However, the Agreement is not yet in force; it must first be ratified by 22 States, in terms of their national constitutional requirements. And the negotiations (conducted in two phases) are still to be completed; including tariff schedules, rules of origin and specifics on trade in services as required for Phase I.

Implementation by the State Parties starts once the new Agreement is in force. It is important to understand what they are undertaking to do.

Article 4 of the Agreement explains the nature of the new obligations: The State Parties shall progressively eliminate tariffs and nontariff barriers to trade in goods; progressively liberalise trade in services; cooperate on investment, intellectual property rights and competition policy; cooperate on all trade-related areas; cooperate on customs matters and the implementation of trade facilitation measures; establish a mechanism for the settlement of disputes concerning their rights and obligations; and establish and maintain an institutional framework for the implementation and administration of the AfCFTA. (Emphasis added.)

The AfCFTA is not at a standard Free Trade Area (FTA), which is limited to trade in goods. Its legal instruments will, once in force, cover trade in goods, trade in services, competition, investment and intellectual property rights.

This design reflects a sound grasp of how trade is to be conducted under contemporary conditions. Services, for example, are vital to ensure investment, transport, communications, customs procedures and payments will facilitate new commercial initiatives.

This will take time and good domestic governance. In the meantime, these states will continue to trade under the rules of existing Regional Economic Communities (RECs). Overlapping membership challenges (e.g. different rules of origin and standards requirements) will complicate matters for the private sector.

Implementation will require a wide spectrum of follow-up action by the State Parties. New national laws and institutions will be necessary. In the case of trade remedies (anti-dumping, countervailing and safeguard measures), for example, investigating authorities, legislative frameworks and judicial review procedures must exist. Most African States do not presently have the necessary arrangements in place.

An additional factor has to be mentioned. Article 8(2) of the AfCFTA Agreement reads: The Protocols on Trade in Goods, Trade in services, Investment, Intellectual Property Rights, Competition Policy, Rules and Procedures on the Settlement of Disputes and their associated Annexes and Appendices shall form part of the single undertaking, subject to entry into force.

The single undertaking aspect (a concept developed during the Uruguay Round of WTO negotiations) means all negotiations should actually be concluded before new international legal instruments are ratified. All State Parties are bound by the results of the complete package. Ratification of the AfCFTA has already started. Six AU member States have (as at 19 July 2018) ratified the AfCFTA. This can give rise to a serious technical complication.

The complication is the possibility of this Agreement entering into force before all outstanding aspects for Phase I have been finalized. A work plan has been set for the completion of all outstanding tasks in order for entry into force of the AfCFTA to take place by January 2019.

It is possible that 22 instruments of ratification will be deposited before negotiations for Phase I are completed. Entry into force will happen automatically once Article 23(1) has been complied with: This Agreement and the Protocols on Trade in Goods, Trade in Services, and Protocol on Rules and Procedures on the Settlement of Disputes shall enter into force thirty (30) days after the deposit of the twenty second (22nd) instrument of ratification.

The normal procedure is that States complete all negotiations before they ratify new international agreements. As sovereign States they must know what their future legal obligations will entail. Their national constitutional rules may also require the same. 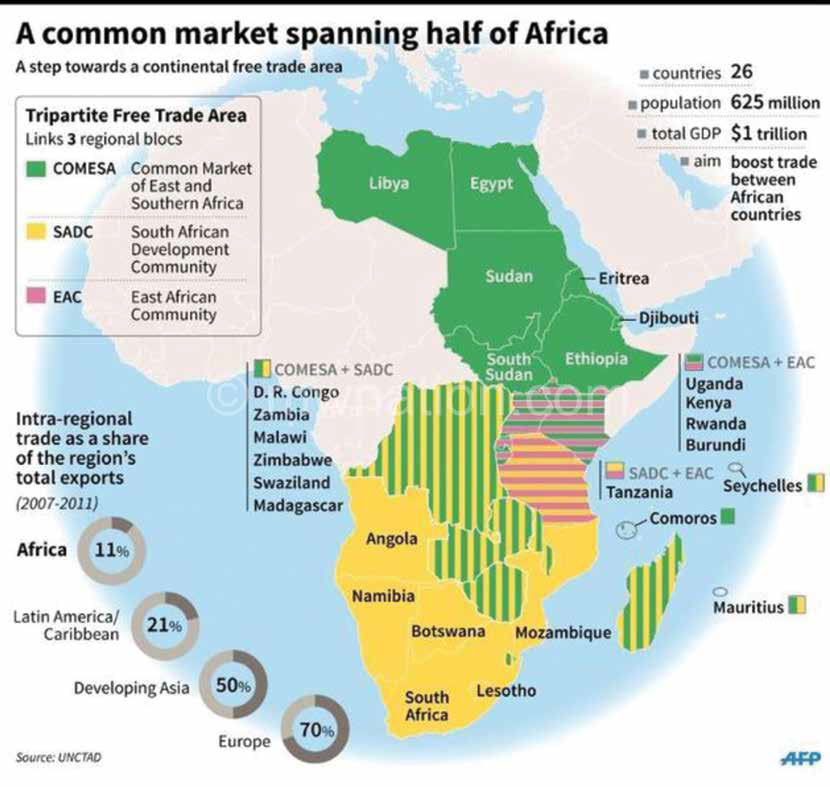 Should the AfCFTA enter into force before all outstanding Phase I matters have been finalized, technical complications will follow. One of them will be about how the outstanding negotiations will be completed. Only State Parties are bound by the new legal instruments of the AfCFTA .

It would be counter to the sovereignty of States to allow those AU Member which have not yet become State Parties at that moment, to participate in the post entry into force negotiations (for a legal instrument which has technically entered into force) and to be involved in decisions on the outcomes of new obligations in an agreement to which they are not Parties.

These matters should be addressed soon. Article 18(5) of the Protocol on Trade in Services contains a provision which may be used and be expanded to resolve these issues in advance: The Transitional Implementation Work Programme developed by Member States shall guide the finalisation of outstanding Phase I negotiations on this Protocol, before the entry into force of the Agreement.

The implementation of the AfCFTA should also be supported by preparatory work of the AU Commission and its Department of Trade and Industry. This is an AU flagship initiative. It merits a properly prepared launch into the world of actual implementation.

The enthusiasm behind this initiative should not be dampened by delays and disappointment for those who stand to benefit from implementation.

Article by: Gerhard Erasmus, a founder of Tralac and Professor Emeritus (Law Faculty), University of Stellenbosch.